While in Tokyo, Waygo had the opportunity to soak up some Japanese culture at an onsen. Onsen (温泉), or “hot springs,” can also refer more generally to spas and bathing facilities and are huge drivers for tourism in Japan. 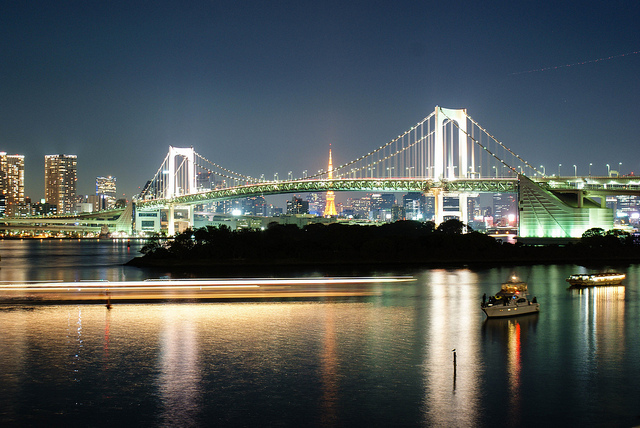 Waygo visited Ooedo-Onsen-Monogatari located in Odaiba (お台場), a large artificial island area in the Tokyo Bay. To get to Odaiba, you can drive across the Rainbow Bridge, take public transit, or ferry. Waygo took the Yurikamome monorail—we recommend going after nightfall for an unforgettable view of Tokyo and Tokyo Bay alit with beautiful colors. Another benefit of visiting Ooedo-Onsen-Monogatari at night besides the beautiful nighttime lights? A cheaper admission by ¥500 after 6pm, Ooedo-Onsen-Monogatari is unique because while it is traditional in many ways, it has been set up like a theme park, including food stalls and other fun activities for the whole family. There are both indoor baths fed by natural hot springs pumped from 1,400 meters underground, as well as outdoor baths including a foot bath set in a large Japanese-style garden. Indoors, a traditional street from the Edo days has been recreated to give an idea to visitors what Tokyo looked like hundreds of years ago.

Nudity & Tattoos
Just because it’s set up like a theme park does not mean visitors adorn their bathing suits. Like all onsen, bathers at Ooedo-Onsen-Monogatari wear their birthday suits. When walking around the non-bathing areas, you adorn a traditional wrap known as a yukata. Traditionally men and women bathed together, but today it is more typical for men and women to bath separately. Nudity is not a big deal whatsoever, no one stares or tries to cover their own body, it feels completely normal.

Nudity means you can no longer hide that tattoo you’ve been hiding from your parents for the last few years. In fact, most onsen forbid tattoos, as tattoos have long been associated in Japan with criminals and organized crime. So if you have a tattoo, make sure to check beforehand if tattoos are permitted, but chances are that you’ll have to save public bathing for outside of Japan. 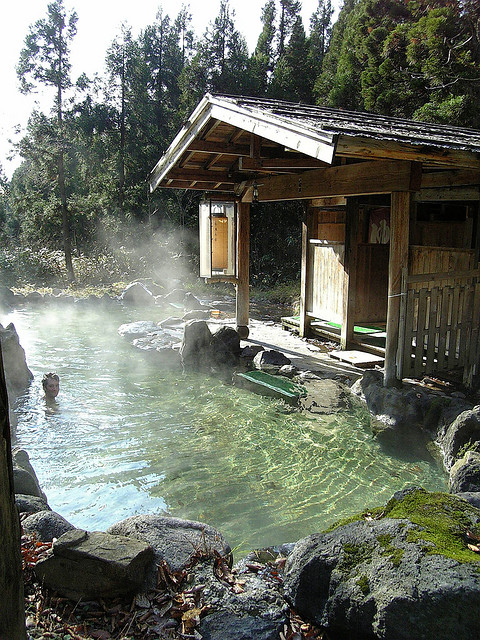 Health benefits
Balneotherapy, the use of bathing for medical treatment, is widely practiced in Japan. The chemistry, temperature, and pressure of thermal baths have curative properties used to treat skin conditions, reduce inflammation and pain in arthritis, and boost the immune system. Japanese onsen must be at least 25°C, though some get as hot as 100°C!! Although generally considered an “alternative medicine,” balneotherapy’s benefits have been demonstrated and accepted in medical studies.

Onsen Etiquette
The onsen is a place for everyone to relax without worries or barriers, so make sure you don’t do anything that would make another guest uncomfortable. Just like any new cultural experience, keep your eyes open (without staring!) to pick up on normal social cues so you know what to do and how to do it.

1. Remove your shoes upon entry to the onsen.

2. Leave the large towel in the locker room, but feel free to take the small one into the bathing rooms, but don’t actually bring it into the water. Most bathers place towel on head when in bath.

3. Shower before entering the onsen.

4. Don’t wash and scrub yourself in the bath.

5. Tie up your hair so that it does not touch the water.

6. Don’t take up too much space in the bath.

7. Rinse off any sweat from the sauna before entering.

8. Try to keep your eyes and hands off other people.

9. Dry off thoroughly before entering the changing room.

10. Don’t treat the onsen like a pool: no jumping in, no dunking your head under the water, and no swimming. And although onsen are not pools, the universal pool rule of no running still applies!

With these rules in mind, now you’re ready to enjoy the Japanese onsen. Make sure to add “visiting an onsen” to your must-do list while in Japan. It’s truly an unforgettable (and relaxing!) experience you’ll want to tell all your friends back home about.