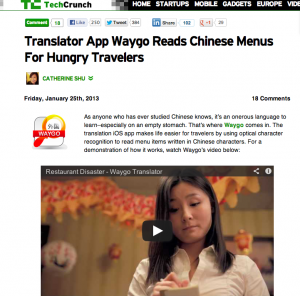 TechCrunch reporter Catherine Shu put Waygo to the test while out eating in Taiwan.

She came across an ingredient on a menu that she was unfamiliar with, eucommia. You don’t know what eucommia is, Catherine?! Just kidding, I also had never heard of it, so thank you for introducing me (and all other readers) to this seemingly magical plant, used in Traditional Chinese Medicine. In fact, it’s listed as one of the Top 50 Fundamental Herbs in Chinese Herbology. Eucommia is used to strengthen numerous body organs, including the kidneys and endocrine system, and (time to put on your eye muffs) promotes sexual functions.

Waygo can be considered a food educational tool, because the more you use Waygo, the more vegetables, fruits, herbs, and cuts of meat you’ll learn about. Chinese cuisine is incredibly diverse and creative, and Chinese markets and restaurants will introduce you to literally hundreds of new foods you never knew existed.

Thank you, thank you for all the love during this exciting period. Every tweet, post, LOL, and comment did not go unnoticed. Thank you especially to the 500 Startups family for your never-ending advice and support. Last but not least, thank you, Catherine Shu, for helping us spread the word through the power of TechCrunch. Now more people than ever before have Waygo in hand, giving them the confidence to truly experience Chinese culture.